… So I apparently am a monster 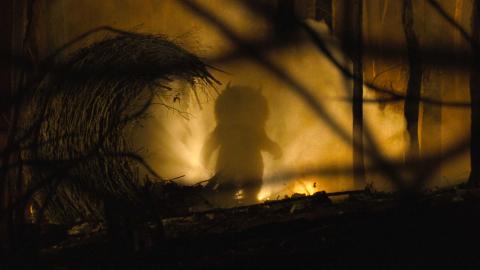 … So I apparently am a monster.

When a monster kisses a face, she burns its lips away, and when a monster caresses a body, she tears its skin apart.

I wonder why nobody has ever thought about how monsters feel when they are alone in their caves. No single text. No single line. No words for the monsters.

Maybe it is because it is monsters who write all the stories – in the loneliness of their potholes, after their daily attempt to come close to humans, to anyone.

Monsters write all the stories, like the story in which a hero saves a community of humans executing the beast. Monsters make up heroes so that, out on an imaginary level, they can be with humans.

But heroes become heroes by killing monsters. Heroes know what everybody wants: to make monsters vanish once and for all – the world is safe and quiet without monsters.

… So it is monsters who write all the stories. By writing their stories, monsters somehow kill themselves, and this is why everybody suspects that the act of writing is a sort of suicide.

Once again: nobody knows how monsters feel in their caves; people never dig into it, it is too scary. But the truth is that within a monster’s cave there is nothing but emptiness surrounded by rocky walls. And solitude.

All the stories are written within those walls. Monsters use their nails, and then their fingertips and their phalanges, and even their teeth, to sculpt the words on cold, humid surfaces, and that is why everybody finds ugliness and dirt all over monsters.

Humans are scared of monsters because they admire their strength. When monsters get out of their caverns, people see powerful bodies, and so they naturally think that monsters have no needs, since they are so huge. It is extensively believed that monsters need no one.

Have you ever seen any? Any hero, I mean?

It is monsters who make up heroes, so that they can pretend being someone weak and beautiful, someone who gains the sympathy of others, someone who can finally put an end to the menacing presence of the beast – after all, nobody is so powerful to kill a monster, but a monster herself.

And so monsters do. Symbolically.

… In the end, it is monsters who write all the stories. This is why stories do not come from anyone you know, but they can be found on the walls of inaccessible caves.